Knut is aiming to recruit around 150,000 new members this year 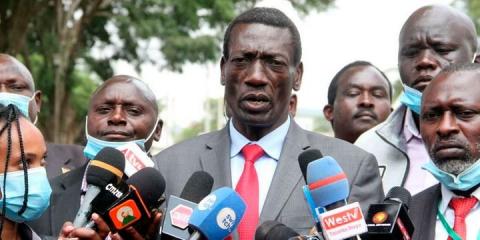 The Kenya National Union of Teachers (Knut) has begun a recruitment drive, aiming to welcome 150,000 members before the end of this month.

Secretary-General Collins Oyuu on Tuesday said membership forms had been distributed to teachers in all regions in the past two weeks. From tomorrow, branch officials will start visiting schools across the country to recruit more teachers.

“So far, the first bunch of 50,000 membership forms have been filled by teachers, the second bunch of forms was dispatched last week, while the third bunch will be dispatched to branches starting tomorrow,” said Mr Oyuu.

While addressing journalists at Knut headquarters in Nairobi, Mr Oyuu said the union was working round the clock to bring the union back to its glory.

“Since our election in June last year, we have been holding meetings with the National Executive Council and National Advisory Council as we work to bring back Knut to factory settings,” he said.

Due to wrangles between the union’s leadership under former Secretary-General Wilson Sossion and the Teachers Service Commission (TSC), the union’s membership plummeted from more than 187,000 to 15,000. By September last year, the number had risen to 16,000 members, said Mr Oyuu.

Last week and this week, members of the union’s regional council have been meeting to discuss how to ensure that all primary school teachers join the union.

“Those who are not members have been paying agency fees to Knut, joining the union will convert that to union dues, giving them an advantage as they will benefit from the union’s negotiated benefits,” said Mr Oyuu.

Once the recruitment is over, the union will present the final list to TSC.