Origin and Founding of KNUT

Formal education system was introduced in Kenya in 1911, with the establishment of the department of education, headed by a director, assisted by a messenger.  Thereafter, there followed rapid developments, culminating in the opening of Kagumo Teachers College in 1932.  Both Kagumo and Makerere in Uganda, trained high calibre African teachers, T2 and T1 who were able to work alongside Europeans, in intermediate and secondary schools, respectively.  The issue of discrimination against, and mistreatment of African teachers, surfaced as early as 1934, and attempts were made to form Kenya African Teachers Union (KATU).  This was however thwarted by the colonial authorities.

There were several reasons that made it necessary to form a teachers union but five most compelling ones were:-

•    To Look into the issue of salaries paid to African teachers  vis-à-vis European teachers teaching at the same level;
•    Harassment of teachers by supervisors and inspectors of schools, without reference to any ground rules;
•    Blatant racial discrimination in housing and allocation of duties, especially in boarding secondary schools;
•    Denial of certain basic rights (pension, leave, medical allowances etc) to teachers as workers.

It took a long wait of nearly a quarter a century, from 1934 to 1957 before the bold teachers of the nineteen fifties succeeded in securing authority to found a teachers union and  on 4th December, 1957, the Kenya National Union of Teachers (KNUT) was founded at a conference held at DEB School, Pumwani, in Nairobi.

Once launched in 1957, the KNUT discovered that the many grievances, of which five have been outlined, could not be addressed because the various employers were unwilling to come to a negotiating table.   KNUT was therefore forced to put pressure on the colonial government to establish, by legislation, one employer for teachers, with whom negotiations could be held.

The colonial government did not respond positively, and it took additional pressure, backed by a series of strikes, from 1962 to 1966, for the newly independent Kenya government to accede to the establishment of such an employer.  The Teachers Service Commission (TSC) was thus created by an Act of Parliament (Cap 212) in the late 1966, and became operational from 1st July, 1967. 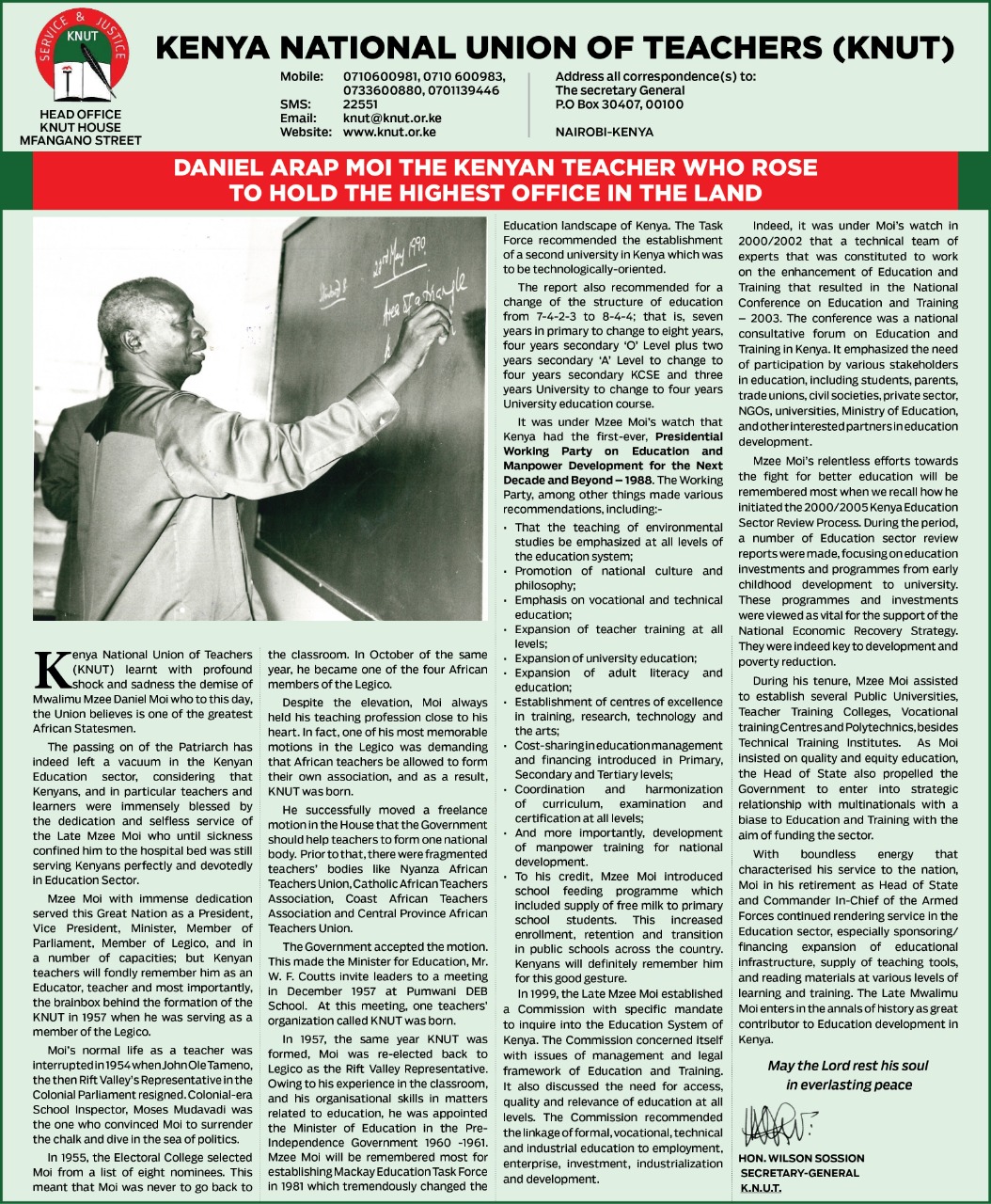 Aims and Objectives of the KNUT
The KNUT was founded as both a trade union and professional organisation, to unite all teachers of Kenya and look after their welfare and professional interests.  In the process the KNUT also promotes educational development generally, and the teaching profession, in particular.

The aims and objectives of the Union are contained in Article II of its constitution, and falls into seventeen clauses.  An analysis of the clauses reveals that they fall into five functional areas, namely:

(i)    Uniting teachers of all grades, and providing a forum for their cooperation, and cooperation with members of similar unions and bodies within and outside Kenya;
(ii)    Fighting for improved terms and conditions of service for teachers, protecting teachers’ interests as workers generally – including legal representation in disputes.
(iii)    Promoting programmes aimed at improving teachers’ welfare or socio-economic status;
(iv)    Contributing, directly or through teachers, or members, to professional work in teaching and development of education services in Kenya.
(v)    Mobilization of resources and acquisition of assets and funds, to ensure effective functioning of the Union, for the benefit of the members.